It has been a fun-filled 24 hours. Yesterday was a school outing day. We were attending a CPR/health outing at the same church that our co-op is held at. Gracie also had a sleepover that evening with one of her co-op buddies. Since we still hadn’t picked out a birthday gift we left early to go shopping. When we pulled into the store’s parking lot Tyler noticed the shopping cart drop off station. “Look,” he said, “They have a fence post here too for bad kids!” He had to try it out and see how it compared to his fence post at home. 🙂 On our way into the store we ran into the very family that we were there to shop for..what a coincidence. After making our purchases we headed to our outing. 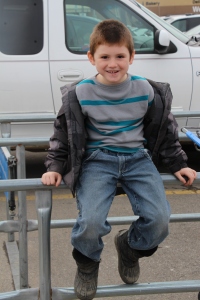 At the outing the kids were split into groups. There were 3 different stations that they rotated through: a CPR class where they learned and practiced doing CPR on a mini dummy, a first aid class, and a health class where they had a healthy snack, talked about nutrition and played. Tyler spent his time in the health room playing games and snacking. 🙂 It was a great outing and the kids all said that they enjoyed it and learned a lot. After the outing Gracie went home with her friend and I drove the other three back home.

Soon after arriving home we received a call from Toby. He told me to have the kids dressed and ready to go because he had a fun treat in store for them. He was able to get discount tickets to the Monster Truck show in Pittsburgh and he wanted to surprise the kids. This is why Toby is the favorite parent. He is so much fun and always comes up with spontaneous, memory making activities for the kids. It would have never even occurred to me to take the kids to a Monster Truck show. 🙂 When he got home he told the kids to get into the car but wouldn’t tell them where they were going. They spent the next hour guessing but there was no way they were going to guess a Monster Truck show! When we got downtown and saw the Consol Energy Center they thought maybe we were going to a hockey game. We found a parking spot and the kids were in awe of the fact they were walking through Pittsburgh at night with all of the big buildings lit up.  When we made it inside and the kids saw the Monster Trucks they were excited..especially the boys. They enjoyed the big trucks, the tricks, and the noisy atmosphere. Rusty’s favorite truck was Monster Mutt because he thought it looked like Brownie.

Tyler loved Grave Digger because it was his favorite color.

Another hit of the night was Monstersaurus who eats cars and blows fire. 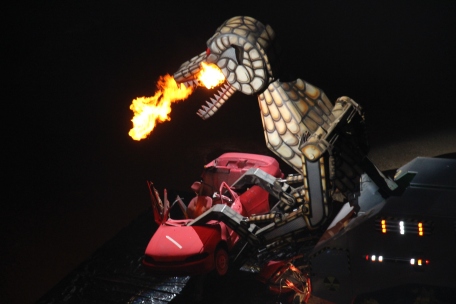 It was a fun night and unlike anything I had ever been to or would have chosen to go to on my own. Toby is such a good Daddy!

As we were leaving the show Toby took the kids down to the lower level so that they could see the trucks up close. Molly was impressed by how big they were!

When we stepped outside we were surprised to see it snowing. It was beautiful. As we walked to the car the kids tried to catch the big, fat snowflakes on their tongues. It was a magical walk through the city!

On the way home we were talking about the meteorite that hit Russia yesterday. I was trying to explain what a meteorite was to Tyler and was able to find a video of the meteorite hitting earth on Toby’s smart phone. It was quite impressive and Tyler wanted more details..where did it come from, was anyone hurt, who threw it. Rusty, very patiently and scientifically, explained to Tyler all he knew about meteorites, the earth’s atmosphere, gravity, etc. Tyler listened to Rusty’s explanation and then with a voice full of disbelief asked, “No, really Russ..who threw it at us? Was it an alien??

Speaking of falling rocks..yesterday I woke up, looked down at my wedding ring and discovered the rock was missing…my diamond was gone. My heart dropped to my stomach as I thought about the probability of actually finding a small diamond in this big house and that is if I’m even lucky enough to have lost it in the house. I told the kids what happened and everyone began searching on their hands and knees through the carpet. After a few minutes of searching Tyler yelled out..”I know! Let’s pray, God will help us find it!”  I told him that was a great idea then he hesitated and said, “but we should look ourselves first then if we can’t find it anywhere we will ask God for help.” As I listened to his words I thought to myself how often that is our philosophy when calling on God. So often He is our last resort rather than out first choice. We think we can do it ourselves and rely on our own talents, knowledge and skills to accomplish a task and only when we can’t do it ourselves do we call on Him. God wants to be our “go to”guy for everything in our lives. There is nothing too small or silly or insignificant to lay at His feet in prayer. With all of those small burdens and worries I often find myself carrying I have to remind myself of the quote that asks,

“Have you prayed about it as much as you have talked about it.”

So we stopped looking and started praying. As I knelt beside my bed I looked down. There next to my knee was my fallen rock…the diamond that was given to me on Valentine’s day 16 years earlier. God heard, God answered..Amen.