This little piggy saved a penny…

this little piggy saved none.

Monday night was family night, and this week I had a lesson planned. After our great class at church on Tuesday, “Saving for a Rainy Day,” I have been pondering how to work the lessons I learned at that class into a family home evening lesson for my kids.

To make the night more fun I found candy coins to use as part of my lesson. I also found plain piggy banks at the craft store that I thought the kids would enjoy personalizing.

We began by showing a video that talked about the difference between “wants” and “needs.” This then led into a great discussion with our kids as we played a game: “Want” or “Need.” We would call out an expense and they would vote on whether it would qualify as a “want” or a “need.”The older kids had a much better understanding of the difference than the younger boys who felt McDonald’s happy meals were definitely a “need”. We had some great debates on whether some of the items on the list were truly a “need” or whether one could live without them, thus making them a “want.” We observed that the line was sometimes blurred, depending on your life situation or where you live. We talked about the many things we perceive as “needs” in America that would be considered a “want” in other areas of the world.

Next we talked about the two ways to “find” the money in your budget to begin saving:

We then examined our own family budget and came up with budget saving ideas. The kids helped us make a list of areas where we could “trim the fat” and let them brainstorm ways we could make saving a focus in the upcoming months.

I was really proud of them.

We then talked about their “budgets”,

in other words:  their allowance. 🙂

I have always struggled with how to handle childhood allowances. I don’t believe that children should be paid for doing their chores. I feel like that is just part of being a family. We also meet all our children’s needs: food, clothes, etc. so there was never a need to give them money for those things.

The flip side of this argument was that we wanted to teach our children to tithe.

However they needed “income” to learn the lesson of the blessings that come from paying a tithing to the Lord.

So our solution, when the children were little, was to begin with an allowance of .30/week, paid in pennies. Those chubby little hands would count out three pennies each week to take to church and the rest would be saved for a trip to the penny candy store.

When they got a bit older the allowance increased to $1.00/week.

When the boys moved into the family the older kids began receiving $2.00/week and the little boys got $1.00/week.

After the cheering quieted we explained what would be happening with that extra weekly allowance. After discussing the benefits of saving, we then explained the 50-40-10 method of budgeting.

We used our candy coins to illustrate it.

10 cents would go toward tithing,

and 50 cents would be theirs to spend.

We ended the evening with our piggy bank craft…

because it is so much more fun to save when you are saving up in a cute pig!

Each child was given a ceramic piggy bank, ceramic markers and paints, and free rein to let their creativity run wild. They had a lot of fun with this family night activity, and I loved seeing what they all came up with for a piggy bank design.

Here are the finished pigs… 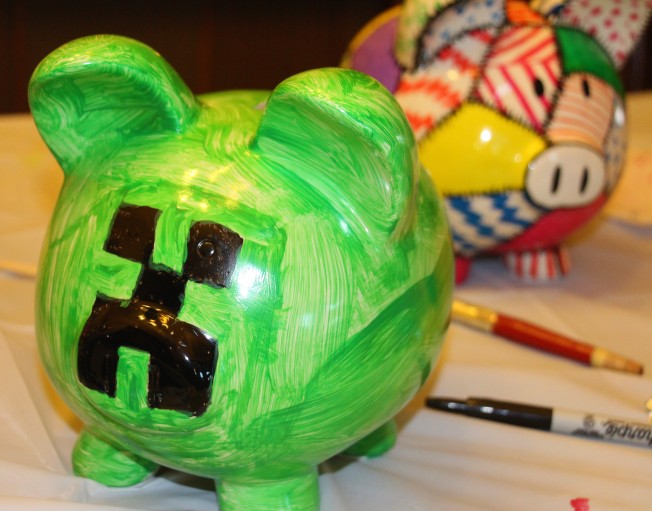 Tyler’s “swimming pig” (Those are red goggles he is wearing) 🙂

Didn’t they do a great job?!

Now they just have to start feeding them!

How do you handle “allowances” at your home?