“In fourteen hundred ninety-two
Columbus sailed the ocean blue.
He had three ships and left from Spain;
He sailed through sunshine, wind and rain.
He sailed by night; he sailed by day;
He used the stars to find his way.
A compass also helped him know
How to find the way to go.
Ninety sailors were on board;
Some men worked while others snored.
Then the workers went to sleep;
And others watched the ocean deep.
Day after day they looked for land;
They dreamed of trees and rocks and sand.
October 12 their dream came true,
You never saw a happier crew!
“Indians!  Indians!”  Columbus cried;
His heart was filled with joyful pride.
But “India” the land was not;
It was the Bahamas, and it was hot.
The Arakawa natives were very nice;
They gave the sailors food and spice.
Columbus sailed on to find some gold
To bring back home, as he’d been told.
He made the trip again and again,
Trading gold to bring to Spain.
The first American?  No, not quite.
But Columbus was brave, and he was bright.”

Today, in honor of the upcoming Columbus Day holiday, we traveled down to Pittsburgh to visit the Nina and the Pinta.

We were joined by other families from our co-op to visit this moving museum that is in Pittsburgh for the next two weeks. They are docked off Station Square, on the south side of the city, which made for easy parking and a fun overall experience.

Miss Lana and her kids drove down with us in Big Bessie and three other co-op families met us down at Station Square. 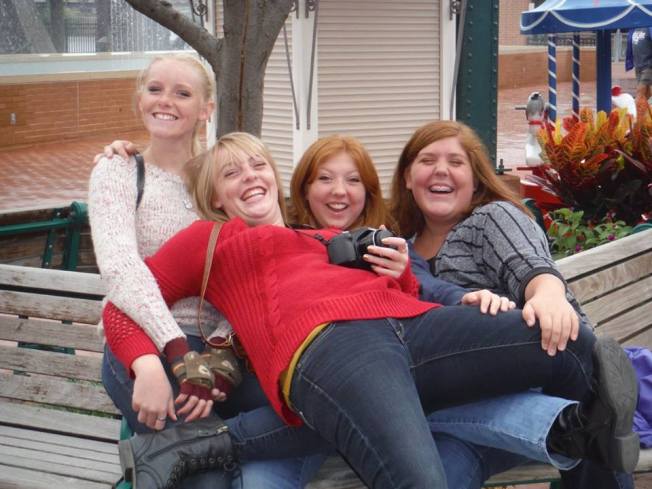 Before we left I put on the Christopher Columbus movie for the little boys to watch, more for Tyler’s benefit than anyone else’s. Ozzie was excited about seeing these realistic replicas of Christopher Columbus’s ships after recently studying about his historical voyage in history. 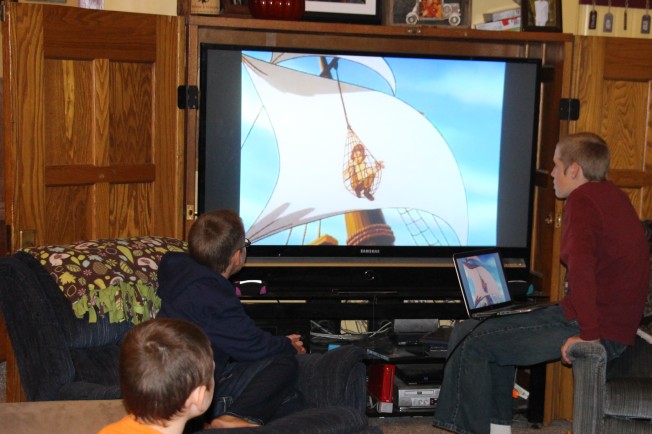 As we waited for the rest of our friends to arrive for our group tour the kids had fun exploring Station Square and watching the dancing fountain. This would be a fun place to let kids play on a hot day…but it was not a hot day! We tried to keep all the little ones dry and out of the water, which turned out to be a losing battle. The fountain sprays were simply too tempting. 🙂

The day was overcast and cool but the rain held off until the end of the day, so we really couldn’t complain.

When our entire group was present we were assigned a crew member who lead us through a walking tour of the smaller Nina and then the larger Pinta ship. 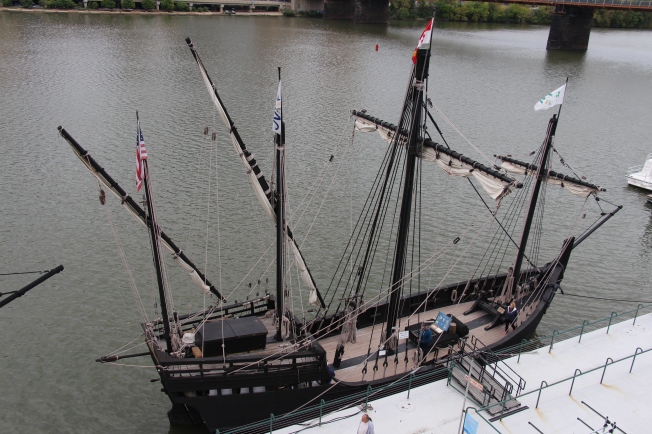 “The Niña is a replica of the ship on which Columbus sailed across the Atlantic on his three voyages of discovery to the new world beginning in 1492.  Columbus sailed the tiny ship over 25,000 miles.  That ship was last heard of in 1501, but the new Niña has a different mission.  We are a floating museum, and we visit ports all over the Western Hemisphere.”

“Pinta was recently built in Brazil to accompany the Nina on all of her travels. She is a larger version of the archetypal caravel and offers larger deck space for walk-aboard tours.”

The Columbus Foundation shares the following information about their floating museum on their website:

“The original Niña, Pinta, and Santa Maria used by Christopher Columbus on his first voyage across the Atlantic were common trading vessels. The Santa Maria which Columbus never liked, ran aground and sank on Christmas Eve 1492 in Hispaniola (now Cap Haitien). She was a Nao, a type of cargo vessel. The Niña and Pinta were Caravels which were used by explorers during the Age of Discovery. The Pinta returned home and disappeared from History without a trace, but the Niña, now there’s a woman with a past!

The Niña was Columbus’ favorite and for good reason. She was named Santa Clara after the patron saint of Moguer. A Spanish vessel in those days had an official religious name but was generally known by nickname, which might be a feminine form of her masters patronmyic, or of her home port. Santa Clara was always Niña, after her master-owner Juan Nino of Moguer.

Vincente Yanez was her Captain on Columbus’ First Voyage, and he later discovered the Amazon on an independent voyage. Built in the Ribera de Moguer, an estuary, now silted up, of the Rio Tinto, Niña made the entire First Voyage, bringing Columbus safely home. She accompanied the grand fleet of the Second Voyage to Hispaniola and Columbus selected her out of seventeen ships for his flagship on an exploratory voyage to Cuba, and purchased a half share in her.

She was the only vessel in West Indian waters to survive the hurricane of 1495, and then brought back the Admiral and 120 passengers to Spain in 1496. She was then chartered for an unauthorized voyage to Rome, and was captured by a corsair when leaving the port of Cagliari, and brought to an anchor at Cape Pula, Sardinia where she was stripped of her arms and crew. The Captain, Alonso Medel, escaped with a few men, stole a boat, rowed back to Niña, cut her cables and made sail.

She returned to Cadiz in time to sail for Hispaniola early in 1498, as advance guard of Columbus’ Third Voyage. She was lying in Santo Domingo in 1500, and we last heard of her making a trading voyage to the Pearl Coast in 1501. The Niña logged at least 25,000 miles under Columbus’ command.

In 1988, an American engineer and maritime historian, John Patrick Sarsfield, began building what was to become the first truly, historically correct replica of a 15th Century Caravel. John had discovered a group of master shipbuilders in Bahia, Brazil who were still using design and construction techniques dating back to the 15th Century.

It was in Valenca, Brazil, using only adzes, axes, hand saws, and chisels, in additiion to naturally-shaped timbers from the local forest, that the Sarsfield Niña was built.

Jonathan Nance, a British maritime historian and main researcher for the project produced a sail plan for the ship, which represents the Niña as she would have appeared during the eight recorded busy years of her life following her departure from the Canary Islands in September 1492.

In December 1991, the Niña left Brazil and sailed to Costa Rica on a 4000 mile unescorted maiden voyage to take part in the filming of 1492. Since then, the ship has visited over 300 ports in the U.S. She is the only ‘sailing museum’ which is continually ‘discovering’ new ports, while giving the public an opportunity to visit one of the greatest little ships in the world’s history.”

The tour was informative and the opportunity to step aboard and “walk in Columbus’s shoes” was amazing. 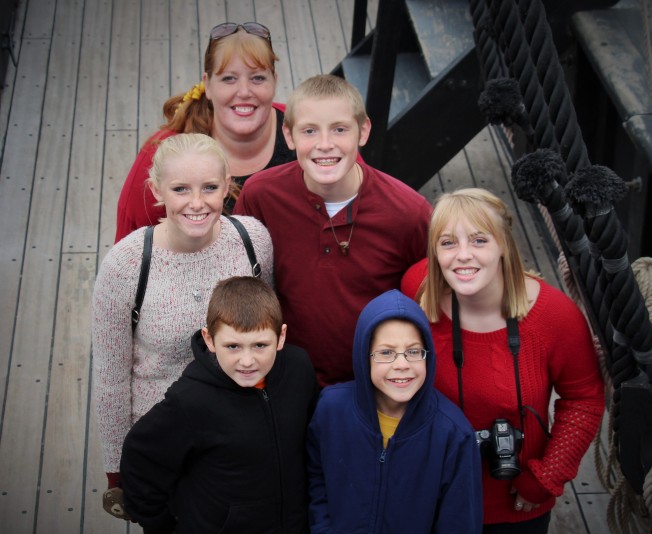 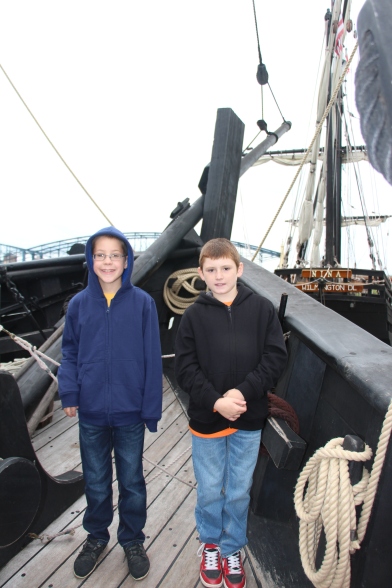 The ships were beautiful and the history lesson that we have all be taught since elementary school became real as we walked the length of the ship, envisioning life as it must have been on the high seas.

After a quick lunch we headed for Part 2 of our field trip adventure…The Pittsburgh Duquesne Incline.