Grace has completed her second highlight video of our amazing journey, stealing snippets of time between schoolwork and touring to work on it.

The next video will be of our five days at Disneyland

We hope you enjoy reliving some of the highlights of  Week 3 with us.

What a trip it has been.

It has been a marvelous journey!

For the last two days we have been exploring the uniquely beautiful geologic formations of Yellowstone National Park. The absence of recent blog posts has been a result of minimal internet access in the area.

We arrived at the western side of Yellowstone at 10:00 pm, on Friday night. We had spent 10 hours getting from Devils Tower National Park to northern Wyoming where Yellowstone is situated. The long travel day was spent getting everyone caught up in school, puttering around the bus, stopping for our weekly grocery shopping trip, refilling the boys’ prescriptions and getting things in order for the next week of travel.

We woke on Saturday morning with icicles on our noses. The temperature had dropped to the 30s overnight. As the day progressed things warmed up, but not before we spotted our first snowflakes of the season, something we certainly did not expect over Labor Day weekend!

Sweatshirts were pulled out and lunched were packed and we were ready to hit the road for a day of exploration.

Everyone was excited about this stop. Being one of the more well-known national parks, the kids had a bit of an idea of what to expect here. They knew they would be seeing geysers and watching Old Faithful erupt, but they had no idea all the other unique sites we would be seeing at Yellowstone.

As we drove into the park Tyler’s first comment was,

It took me a minute to follow his train of thought before I realized that what he was noting was the distinct smell of campfire, as a result of the five forest fires currently burning in the park. 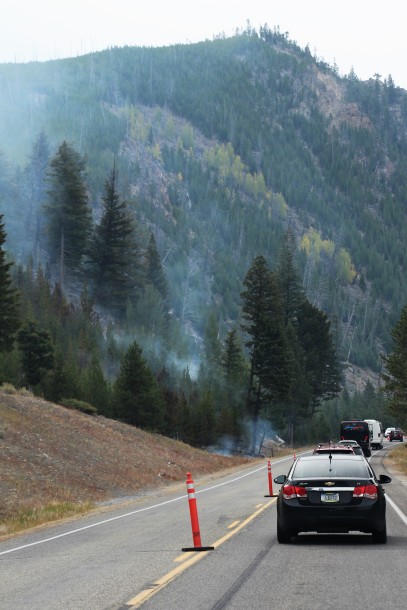 As we entered through the western gate we passed through an area currently on fire. We could see the firefighters on the hillside as we drove through the smoky haze. That night, as we exited by that same road in the dark, the hillside glowed with burning embers. 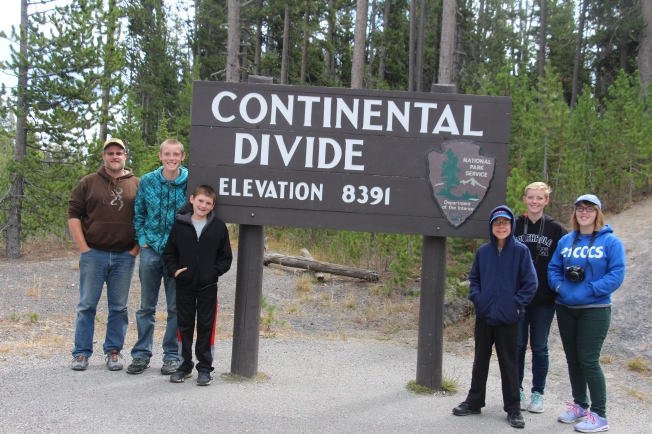 “Yellowstone National Park is America’s first and foremost National Park, drawing over three million visitors yearly. Established in 1872 by the United States Congress “for the preservation of” its many wonders and “for the enjoyment of the people,” and now encompassing 2.2 million acres.

The Park has five entrances and some 370 miles of paved roadway. Situated in the northwest corner of the Wyoming frontier, Yellowstone is a treasure that inspires awe in travelers from around the world, boasting more geysers (about 250 active geysers from amidst 10,000 total thermal features) than anywhere else on the globe.

The other thing that took me by surprise were the crowds! We have been spoiled in our travels by minimal crowds at the places we have visited so far. The return to school for school age children has resulted in smaller crowds at most of the places we have visited. We have found that those we have been touring with tend to be retirees, couples with young children or fellow homeschoolers. This was NOT the case at Yellowstone. The fact it was the weekend, as well as being Labor Day weekend, resulted in massive crowds.

Add to that the fact that Yellowstone is one of the most toured parks by international tourists, and the fact that the rise in visitors has increased by 60 % because of 2016 being the 100th anniversary of the National Park Service, and you have this:

The experience made us all the more grateful that we postponed this cross country trip from June to September!

It was crazy…but we tried to not let the crowds put a damper on the experience. 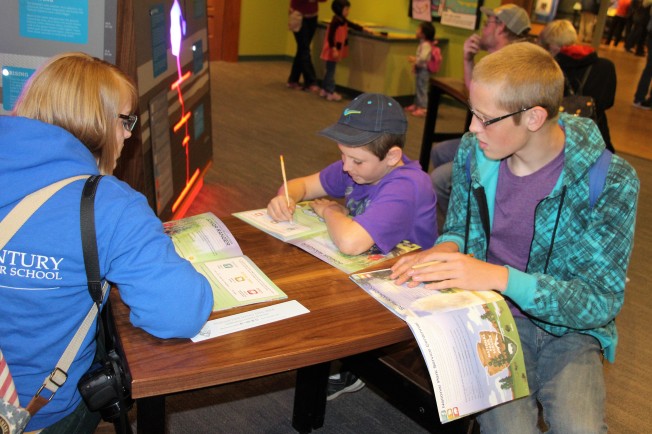 They needed to attend a Ranger-led program.

They decided to attend, “Truths and Myths about Yellowstone” at a beautiful lakeside pavilion on Yellowstone Lake. Check out those views!

“Yellowstone Lake — This is the largest high-altitude lake in the lower 48 states, and it is breathtaking in grandeur. As you follow the long shoreline both east and north, you will see snow-capped mountains rising across the lake. On windy days, ocean-like waves break onto the shore. Be sure to visit Lake Village and walk through the Hotel. You might also want to sit on the porch of Lake Lodge and take in the view” 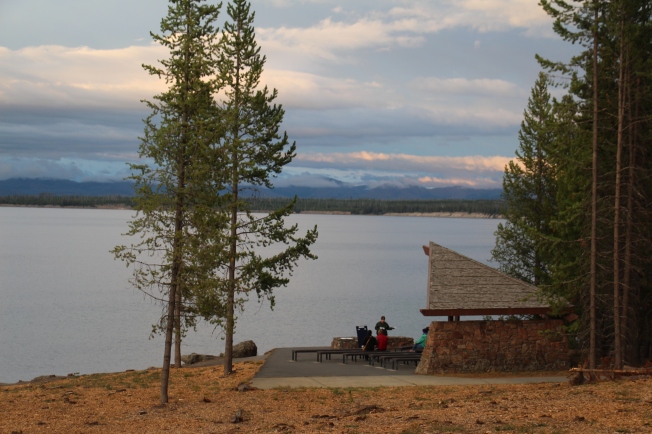 They had to hike a trail or boardwalk and record their observations. They chose the Paint Pot hike:

“Along this short walk you will see very good examples of most types of thermal features found in Yellowstone. These features include some very pretty hot pools, steaming fumaroles, erupting geysers and probably the best easily accessed mudpots in the park. The area is highly active and at least one geyser is usually erupting here at all times.” 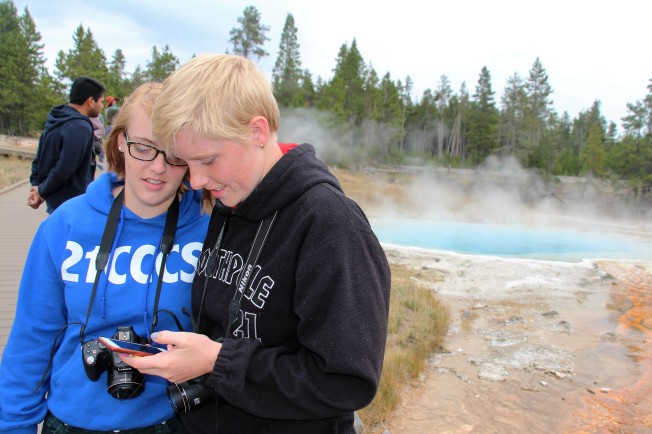 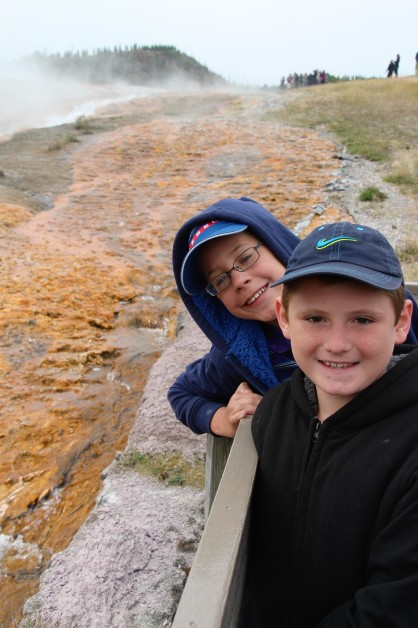 “Temperature 147-188°F Dimensions 250×380 feet. Grand Prismatic is the largest hot spring in Yellowstone, and is considered to be the third largest in the world-New Zealand has the two largest springs. Grand Prismatic sits upon a wide, spreading mound where water flows evenly on all sides forming a series of small, stair-step terraces. The Hayden Expedition in 1871 named this spring because of its beautiful coloration, and artist Thomas Moran made water-color sketches depicting its rainbow-like colors. The sketches seemed exaggerations and geologist A.C. Peale returned in 1878 to verify the colors. The colors begin with a deep blue center followed by pale blue. Green algae forms beyond the shallow edge. Outside the scalloped rim a band of yellow fades into orange. Red then marks the outer border. Steam often shrouds the spring which reflects the brilliant colors. Grand Prismatic discharges an estimated 560 gallons per minute.” 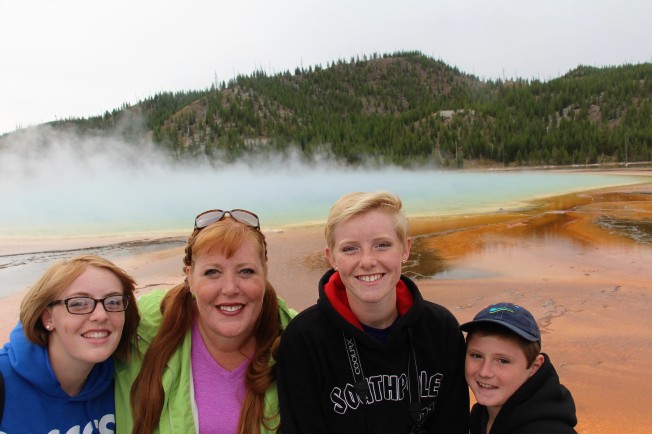 They had to observe Old Faithful erupting and predict its next eruption:

“No visit to Yellowstone is complete without experiencing at least one eruption of Old Faithful. Old Faithful erupts more frequently than any of the other big geysers, although it is not the largest or most regular geyser in the park. Its average interval between eruptions is about 91 minutes, varying from 65 – 92 minutes. An eruption lasts 1 1/2 to 5 minutes, expels 3,700 – 8,400 gallons (14,000 – 32,000 liters) of boiling water, and reaches heights of 106 – 184 feet (30 – 55m). It was named for its consistent performance by members of the Washburn Expedition in 1870. Although its average interval has lengthened through the years (due to earthquakes and vandalism), Old Faithful is still as spectacular and predictable as it was a century ago.” 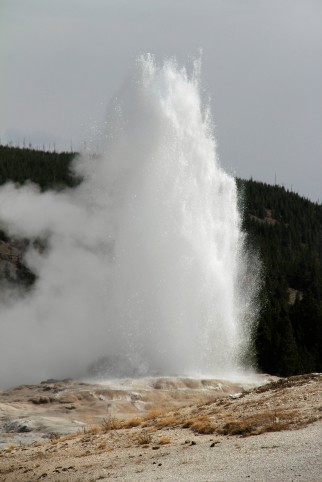 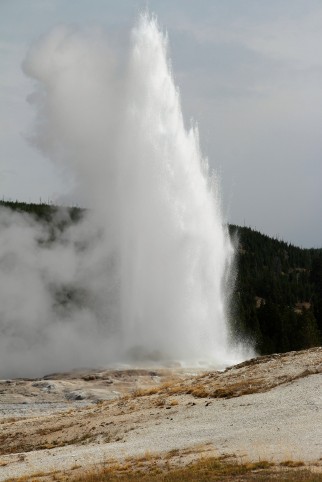 Old Faithful Inn is the most popular hotel in the park.  Built during the winter of 1903-04, the Old Faithful Inn was designed by Robert C. Reamer, who wanted the asymmetry of the building to reflect the chaos of nature. The lobby of the hotel features a 65-foot ceiling, a massive rhyolite fireplace, and railings made of contorted lodgepole pine. Wings were added to the hotel in 1915 and 1927, and today there are 327 rooms available to guests in this National Historic Landmark.

It was stunning. We had fun walking around the lobby. 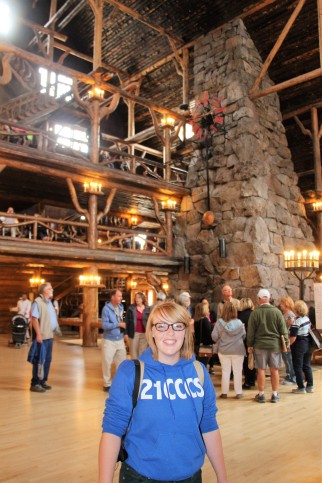 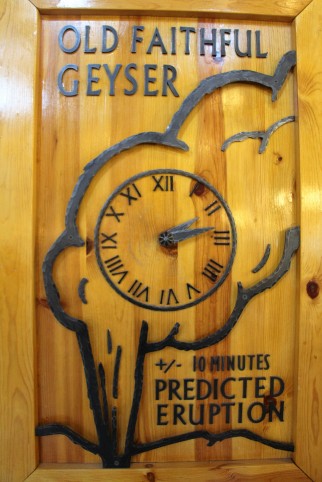 Before we left we bought a few cups of homemade Huckleberry ice cream to share on the porch. 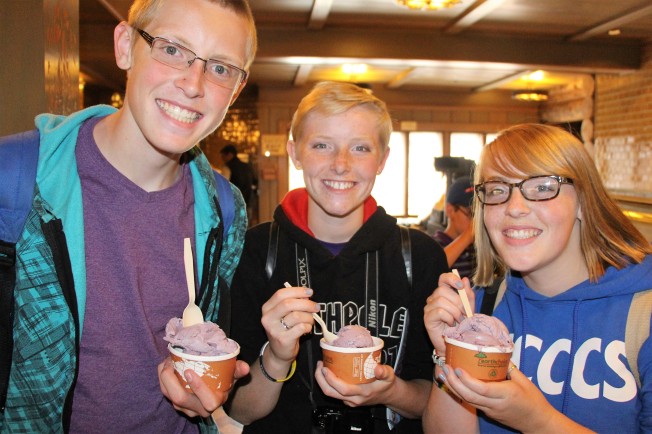 Another place in the park that the kids needed to visit was the Grand Canyon of Yellowstone so that they could sketch the view in their booklet.

The Grand Canyon of the Yellowstone is the primary geologic feature in the Canyon District. It is roughly 20 miles long, measured from the Upper Falls to the Tower Fall area. Depth is 800 to 1,200 ft.; width is 1,500 to 4,000 ft. The canyon as we know it today is a very recent geologic feature. The present canyon is no more than 10,000 to 14,000 years old, although there has probably been a canyon in this location for a much longer period. The exact sequence of events in the formation of the canyon is not well understood, as there has been little field work done in the area. The few studies that are available are thought to be inaccurate. We do know that the canyon was formed by erosion rather than by glaciation. A more complete explanation can be found in the Geological Overview section. The geologic story of the canyon, its historical significance as a barrier to travel, its significance as destination/attraction, and its appearance in Native American lore and in the accounts of early explorers are all important interpretive points. The “ooh-ahh” factor is also important: its beauty and grandeur, its significance as a feature to be preserved, and the development of the national park idea.” 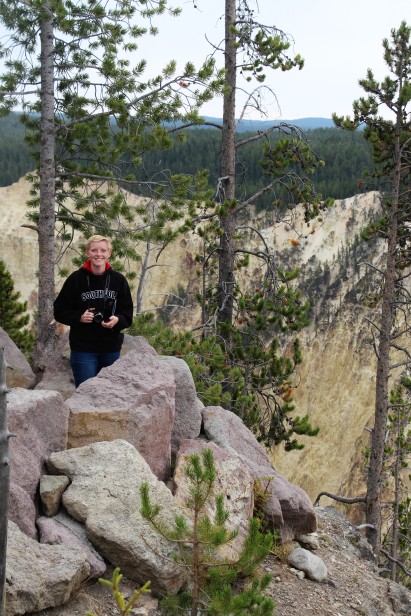 As well as fill out workbook pages recording the wildlife they observed as they moved through the park. We drove through Lamar Valley:

“Lamar Valley — This wide, expansive valley is home to bison, elk, coyote, grizzly and wolf, and is must-visit area for serious wildlife watchers. Bison and elk are readily visible, and coyotes can oftentimes be spotted. Visitors who are willing to rise early in the morning or wait up until dusk also may have the opportunity to see bears and wolves. In fact, Lamar Valley is the #1 destination for viewing wolves.” 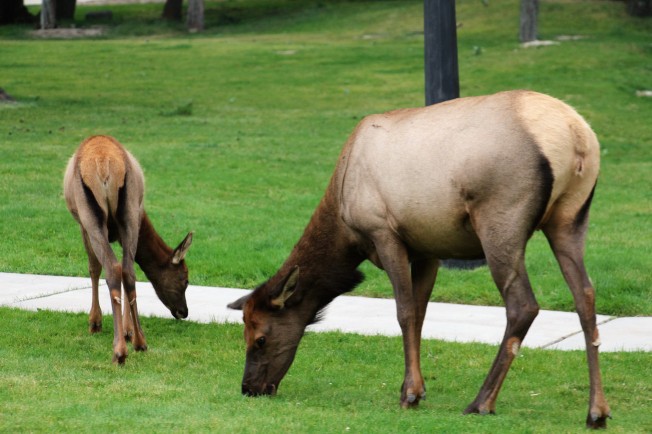 We also made sure we stopped at Mammoth Hot Springs…Incredible!

“Mammoth Hot Springs – This is Park headquarters and it radiates history, featuring some of the oldest buildings in the Park, including structures from the days when the U.S. Army was managing Yellowstone.

Mammoth Hot Springs are the main attraction of the Mammoth District. These features are quite different from thermal areas elsewhere in the park. Travertine formations grow much more rapidly than sinter formations due to the softer nature of limestone. As hot water rises through limestone, large quantities of rock are dissolved by the hot water, and a white chalky mineral is deposited on the surface.” 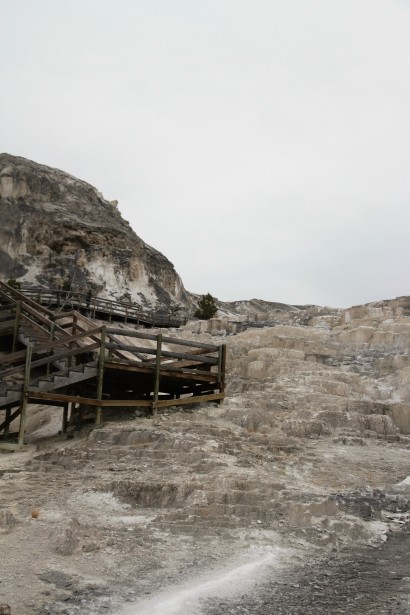 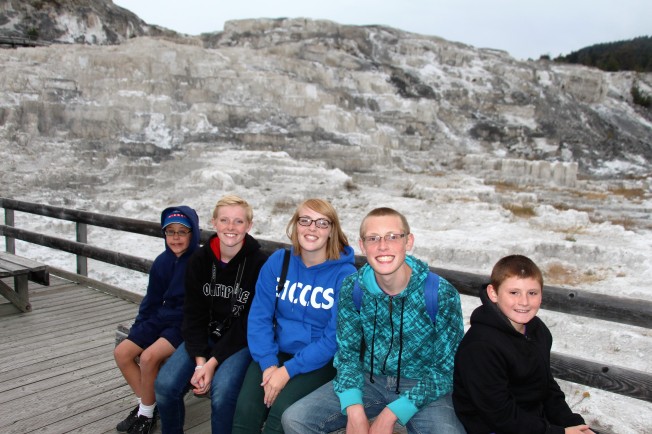 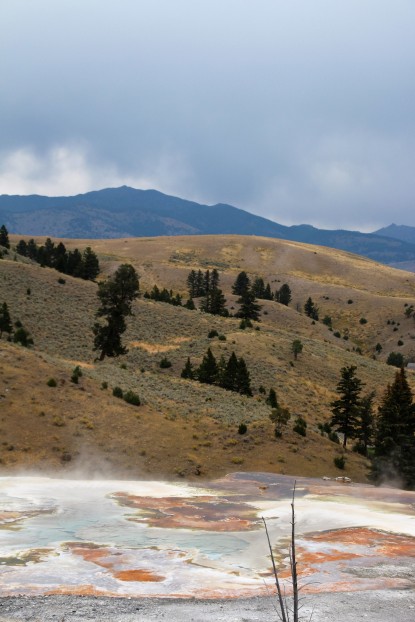 We have found that the junior ranger program really enhances the experience and engages the kids in a way that would be missed if we were simply just moving our way through the park. Filling in the booklets requires them to stop and read the signs, interact with the rangers, ask questions, and stop to really look and appreciate the beauty of the park.

The result of all that hard work: 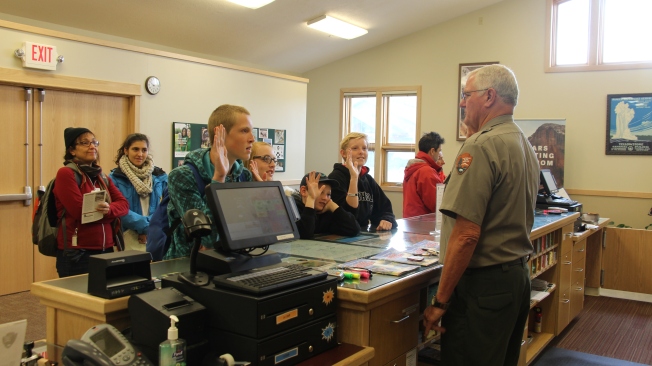 Being sworn in as junior rangers and receiving another patch and junior ranger pin to add to their collection.

This is in addition to getting to keep their completed booklets as souvenirs of the experience and a record of all they learned.